Back to overview
Theatre

The New York Nature Theatre of Oklahoma has obtained world fame with epical spectacles such as No Dice and Life & Times.  The second work consisted of ten parts, each of them based on a telephone conversation of a woman who tells us about her life during sixteen hours in total. For each episode directors Pavol Liska and Kelly Cooper chose a different form. In the first four parts the conversation was translated to the stage with musical and theatre. Episode five became a book illustrated like a medieval bible. Parts seven and eight were two films, respectively in black-and-white and in colour, followed by the last part, a gangster rap.

The regular set of actors with whom the artist couple Pavol Liska and Kelly Cooper scored their greatest successes already disintegrated in 2014. After the successful series the duo now joins forces with the international dance company EnKnapGroup, which operates from the Slovene capital Ljubljana. They present Pursuit of Happiness, a performance that again strikes us as very filmic, like a Hollywood spectacle in theatre format.

“Our project, our main purpose, is always the audience. They have to undergo an experience. What you see happening on stage or screen, those are only the little tricks we learned at the school of acting.”

The title refers to the American declaration of independence, which poses that the pursuit of happiness is one of the three fundamental rights with which each of us is born. But where exactly should we find that happiness ? The answer is this ultra-American, hilarious spaghetti western about the urge for expansion in the Wild West. The EnKnap dancers, who for once talk more than they dance, are as not-American the outsiders. The sauce they serve with the spaghetti contains all the ingredients for a memorable theatre feast : brute and clownish fighting scenes, catching singalong and cowboy clichés. 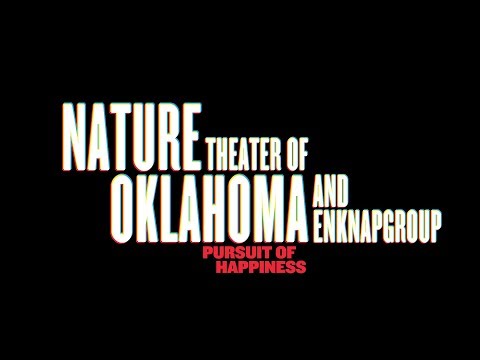