Back to overview
Theatre / Performance / 15+

The Palestinian city of Hebron, which is controlled by Israel, is divided into zones. The central street of the H2 zone is Shuhada Street, the main artery and the most important market of Hebron. But today it is rather a ghost street which -dixit the Israeli army- has been 'sterilised'. Read : freed from Palestinian inhabitants for 'reasons of safety'.

Ruth Rosenthal and Xavier Klaine, who make music and theatre as Winter Family, travelled to the city where they talked with Jewish colonists, Israeli soldiers, Palestinians and foreign observers. Where in a violent microcosm only Truths exist, let this piece cross voices. In a giant replica of the H2 zone on stage, Rosenthal is the tour guide who leads you along their testimonies, their fears, their hope and their despair.  H2-Hebron thus makes you experience personally the exhausting feeling of this unbearable situation.

Winter Family is a musical duo consisting of Ruth Rosenthal and Xavier Klaine. The couple met in Jaffa in 2004 and have been living together ever since between Paris and Tel Aviv. Next to sound tracks and records the genre of which is described as doom swing, funeral pop or even weird wave, the duo also make documentary music theatre with which they tour world-wide. For H2-Hebron Rosenthal and Klaine worked together with a.o Vooruit in Ghent. 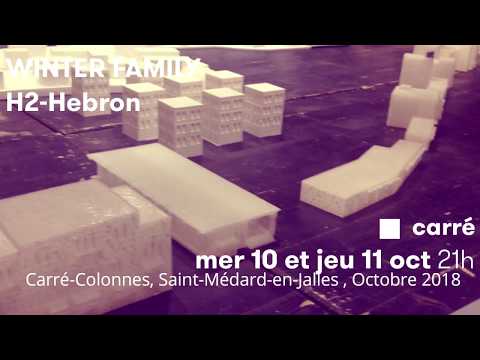